In this datacamp pandas project, we explore the findings of Dr.Semmelweiss data collected in 1847. The results are astonishing and we have to thank datacamp team to share these kind of rare dataset to us. You can see how to do bootstrap analysis using pandas in this project. 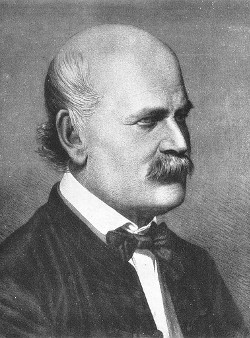 This is Dr. Ignaz Semmelweis, a Hungarian physician born in 1818 and active at the Vienna General Hospital. If Dr. Semmelweis looks troubled it's probably because he's thinking about childbed fever: A deadly disease affecting women that just have given birth. He is thinking about it because in the early 1840s at the Vienna General Hospital as many as 10% of the women giving birth die from it. He is thinking about it because he knows the cause of childbed fever: It's the contaminated hands of the doctors delivering the babies. And they won't listen to him and wash their hands!

2. The alarming number of deaths¶

The table above shows the number of women giving birth at the two clinics at the Vienna General Hospital for the years 1841 to 1846. You'll notice that giving birth was very dangerous; an alarming number of women died as the result of childbirth, most of them from childbed fever.

If we now plot the proportion of deaths at both clinic 1 and clinic 2 we'll see a curious pattern...

Why is the proportion of deaths constantly so much higher in Clinic 1? Semmelweis saw the same pattern and was puzzled and distressed. The only difference between the clinics was that many medical students served at Clinic 1, while mostly midwife students served at Clinic 2. While the midwives only tended to the women giving birth, the medical students also spent time in the autopsy rooms examining corpses.

Semmelweis started to suspect that something on the corpses, spread from the hands of the medical students, caused childbed fever. So in a desperate attempt to stop the high mortality rates, he decreed: Wash your hands! This was an unorthodox and controversial request, nobody in Vienna knew about bacteria at this point in time.

Let's load in monthly data from Clinic 1 to see if the handwashing had any effect.

6. The effect of handwashing highlighted¶

Starting from the summer of 1847 the proportion of deaths is drastically reduced and, yes, this was when Semmelweis made handwashing obligatory.

The effect of handwashing is made even more clear if we highlight this in the graph.

Again, the graph shows that handwashing had a huge effect. How much did it reduce the monthly proportion of deaths on average?

It reduced the proportion of deaths by around 8 percentage points! From 10% on average to just 2% (which is still a high number by modern standards).

To get a feeling for the uncertainty around how much handwashing reduces mortalities we could look at a confidence interval (here calculated using the bootstrap method).

9. The fate of Dr. Semmelweis¶

So handwashing reduced the proportion of deaths by between 6.7 and 10 percentage points, according to a 95% confidence interval. All in all, it would seem that Semmelweis had solid evidence that handwashing was a simple but highly effective procedure that could save many lives.

The tragedy is that, despite the evidence, Semmelweis' theory — that childbed fever was caused by some "substance" (what we today know as bacteria) from autopsy room corpses — was ridiculed by contemporary scientists. The medical community largely rejected his discovery and in 1849 he was forced to leave the Vienna General Hospital for good.

One reason for this was that statistics and statistical arguments were uncommon in medical science in the 1800s. Semmelweis only published his data as long tables of raw data, but he didn't show any graphs nor confidence intervals. If he would have had access to the analysis we've just put together he might have been more successful in getting the Viennese doctors to wash their hands.

1 thought on “Dr. Semmelweis and the Discovery of Hand-washing”